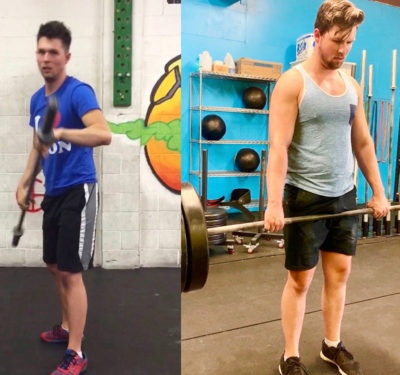 Growing up, I was always into health and fitness. When I found CrossFit in 2011, I became obsessed with it. Throughout my life, I’ve had numerous operations, including a bone cancer diagnosis, spinal fracture, blood clot, infections, bouts of pneumonia, and more. So I’m no stranger to setbacks and rehab. CrossFit helped me immensely through those times, and not just physically, but mentally, and emotionally as well. 2012 was the first time I stepped foot into Parkside CrossFit. Several years later I moved nearby and became a member. After 1 year, I became the owner. I struggled my whole life with low confidence due to being “skinny”. I completely believed it was just genetics and I wasn’t lucky like other guys. Despite being very fit, I was a skinny gym owner, and I hated it. My transformation mirrored the gym itself – new equipment, new layout, better systems – I became more knowledgeable, learned from my mistakes, and eventually accomplished my goal of putting on weight. Now I’m particularly passionate about helping skinny people add muscular bodyweight! I’ve been coaching for 14 years, and have well over 10,000 hours of experience. My mission in life is to help 1 million people live happier and healthier lives. What drives me is helping people. Every day I wake up and work on my mission. I’m not involved in the day-to-day operations as much as I used to be, and my primary focus is supporting the staff at Parkside so they can excel at what they do best!